#WednesdayWisdom is a new series from Way To Blue where each week we profile a specific platform to help you understand what it is, why you should care, and how you could use it in your own strategy.

Snapchat‘s parent company Snap, Inc just filed for IPO and over the next few minutes, we’re going to look at how the messaging app has transformed from a simple disappearing messaging app into a digital video phenomenon with an estimated value of $25 billion dollars, making it the third most valuable tech company at the time of its market debut after Alibaba and Facebook.

Snapchat, founded in a Stanford dorm room in 2011 began as a simple way to send friends photos, has grown to allow users to send and receive video and text messages that can last up to a maximum of 10 seconds. Since 2013 Snapchat has introduced new features like Stories (including Discover & Live channels), geofilters, stickers, lenses, and Snap Ads that have become essential for brands to advertise on the platform.

Why should I care?

What else should I know?

In September of this year Snapchat rebranded itself as Snap, Inc – a camera company, as it moved to release more products outside of its flagship product, Snapchat. Snap, Inc’s first announcement following the rebranding was that it would be releasing a new line of wearable-tech sunglasses called Spectacles, that are designed to capture raw content and live moments to upload directly to your Snapchat Story.

Spectacles are currently only available to consumers through a traveling vending machine that appears at a random location across the United States every 48-72 hours. You can find the location of the current vending machine at the Spectacle website.

How are brands engaging on the platform?

Stories – A feed of all your videos and photos that you’ve selected to be included in your story. Stories exist for 24 hours and can be viewed by you and all your friends and can be replayed as many times as you want (a third of Snapchat users use Stories). 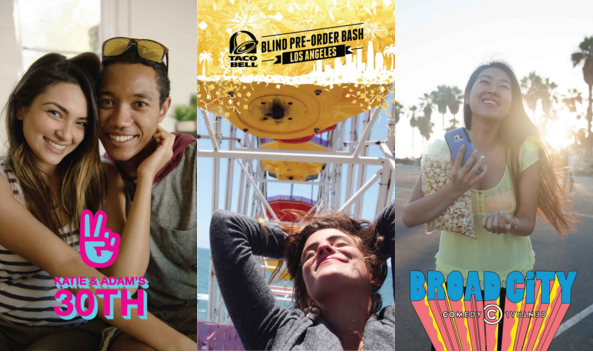